Residents  of the South Huntington school district will vote Monday on a two-part bond proposal that education leaders say would transform and elevate the district.

Called Vision 2020, the plan’s first proposal seeks $86 million to pay for renovations that would affect every building and nearly every aspect of the district, from building repairs and upgrades to academic, artistic, athletic and significant security enhancements.

Proposition 2 would raise $29 million for air conditioning throughout school buildings. School officials say that a district-wide air conditioning program is more efficient in the long run than the need to install separate units, classroom by classroom, for students who claim allergy or other medical ailments that require AC and is needed for buildings that are now in use year round.

The second proposition depends on the passage of the first.

Administrators and school board members have spent countless hours on the plan, talking with community groups, and answering questions at through public presentations that were also shown live on social media. At Saturday’s homecoming parade, school board president Nicholas Ciappetta and superintendent Dr. David Bennardo dashed through the parade line, stopping to talk with residents and hand out pennants supporting the proposal.

They are aiming high: Ciappetta said the plan would make South Huntington “the premier district on Long Island.”

Bennardo has spoken passionately and at length about transforming an already good school district into a superlative one, in an area surrounded by top districts. He regularly calls the plans “transformative” and the impact on the district “seismic.”

Earlier this summer, Bennardo said, “”I have been in the field of education for 32 years and can honesty say that this bond is the most exciting initiative I have ever seen. It is really a rare and special privilege to work on a project that has the potential to forever transform a school district. Vision 2020 is our community’s special moment in time that our children and grandchildren will speak of for years to come.”

They have also run into some opposition, first over tax increases and, for some, doubts about the accuracy of some of the numbers school administrators are using.

On the battleground of social media, some residents have objected to costs, challenged the need for improvements, objected to a new bond when a previous one isn’t yet fully paid off, and questioned why people who don’t own homes should be able to vote on an issue that would raise property taxes.

Estimates of the total cost to taxpayers have come down in recent months. School administrators say it will receive far more reimbursement from the state than it originally expected and say that the average resident would pay about $52 more the first year and up to $363 in other years, if both proposals pass. They say that 92% of the projects  are eligible for 54% state reimbursement.

The school board voted recently to ensure that “the full 54% of every dollar spent is returned directly to the taxpayer.”

And school officials argue that a stronger school district will improve real estate values in the district.

Like other districts, such as Cold Spring Harbor, Commack and Harborfields that are also proposing bond votes, South Huntington officials are trying to take advantage of current low interest rates.

The vote is scheduled Monday from noon to 9 p.m. at Walt Whitman High School. Residents can register to vote Monday if they are otherwise eligible to vote.

Here are some of the changes the district wants to make: 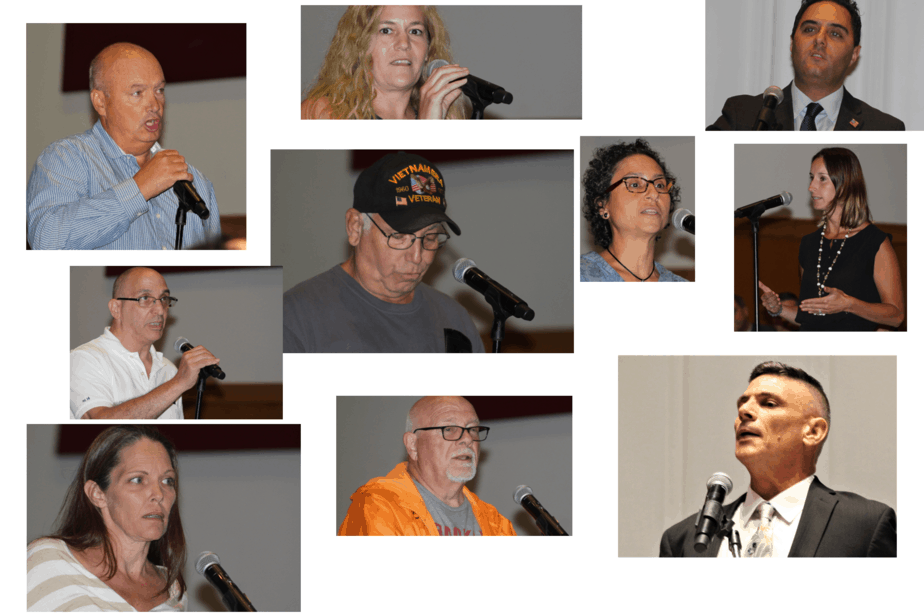 Residents and school officials at a public review of the bond proposals.