Walt Whitman High School senior Gianna Paul has been named to the United Soccer Coaches Fall High School Girls All American team with players from across the country. Paul was able to achieve this award with her academic performance and  soccer talent.

Before playing soccer for Walt Whitman, Paul played for Long Island Soccer Club, an outside academy.  She currently plays for SUSA Academy during the Whitman off-season.

Paul has wanted to play soccer at Walt Whitman since the seventh grade, and she finally joined the school team as a junior.

“It helped with bonds and friendships that I never thought would even have started,” Paul said. “Not only did it help with friendships, it helped with the academy team because my foot skills got so good from there.”

One of the highlights of her time on Whitman’s team were the night games.

“Playing under the lights, having all of your friends there, all the parents, all the opposing parents, it’s just so nice,” Paul said. She added that night games weren’t common in club ball. “I wish I could do that again,” she said.

Paul is committed to play for the Division I team at the University of Alabama.

“We are so proud of Gianna for earning this tremendous honor,” said David Barth, supervisor of Physical Education, Health, Athletics and Recreation. “She is a terrific representative of the South Huntington School District, and a true leader on and off the soccer field.”

“Gianna embodies everything that we look for in a student-athlete.”

After the gym at Huntington High School was flooded, the Blue Devils scrambled to shift  games and practices to other sites.

We see the light at the end of the HHS gymnasium and it is looking fine! Great work in short time! Thanking all for their patience and our neighbors @HarborfieldsCSD @southhuntufsd @Elwood_Super for helping us through! pic.twitter.com/tyeRdIrTZX 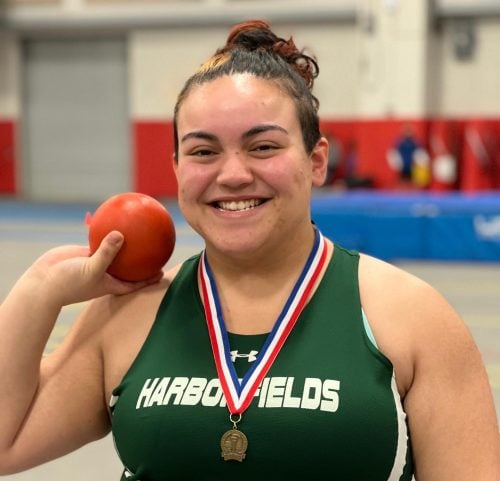