Suffolk County police and several Huntington religious leaders met Saturday in an effort to improve communication and better connect police and the communities they serve.

The Huntington roundtable was  part of a four-day National Faith & Blue Weekend program of activities and meetings to improve  trust and try to tamp down tensions that have arisen around the country in the wake of  protests over police conduct during confrontations with the  public.

Inspector William Scrima, commander of the Second Precinct, Deputy Commissioner Risco Mention-Lewis and others said they hoped that Saturday’s meeting was the start of regular dialog in the community.

Nationally, thousands of people have joined in protests since the May death of George Floyd after a Minneapolis police leaned on his neck for several minutes. In Huntington, Black Lives Matter protesters marched in the streets, including to the Second Precinct stationhouse, while more recently, supporters of the re-election of President Trump have driven in caravans through East Northport, Northport and Huntington.

Scrima addressed a question about protesters walking in the streets and the caravans of Trump supporters who have driven through East Northport, Northport and Huntington in recent weeks. He said the police were focused on safety and  not violations, such as not social distancing or not wearing masks, or that they hadn’t witnessed, such as complaints that caravan drivers deliberately spewed smoke at opponents or taped over their license plates to avoid identification.

He said that Black Lives Matter protesters were allowed to walk in the roadways when they turned out in large numbers, but were asked to move to the sidewalks when their numbers dwindled to a number that could be accommodated on sidewalks. And he said police helped caravans at  intersections to safeguard traffic, as they did with the BLM protesters.

Some pastors described the work they were doing to encourage their  congregants to trust police, as well as their own encounters with police; officers, in turn, talked about the negative impact of that lack of trust and the anger directed at them over confrontations occurring in other parts of the country.

They plan to meet again Monday at the Tri-Community and Youth Agency in Huntington. 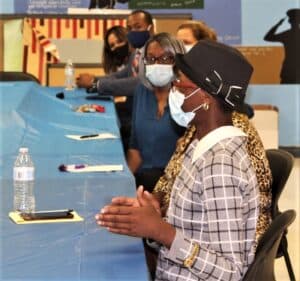 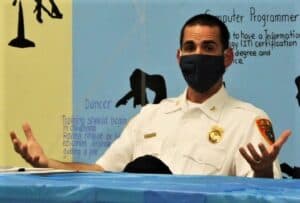 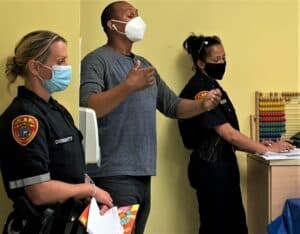