Northport residents argued from both sides Tuesday night over whether a caravan of Trump supporters who drove through the village last week were simply expressing their rights to free speech or trying to intimidate people.

A frequently cited complaint at the Northport Village Trustees meeting  was the blue tape that covered some or all letters of some vehicles’  plates. Some saw an attempt to possibly hide their behavior; others thought  it was a safety issue, with drivers trying to avoid bringing unwanted attention or identify themselves.

Large caravans of vehicles, many of them pickup trucks, have been driving through parts of Huntington and elsewhere, blowing horns and shouting through bullhorns  to show their support for the re-election of President Donald Trump.

Caravans of Trump supporters have left from shopping centers in East Northport and Commack and then headed out East or back through Northport and on into downtown Huntington. The caravans have been met by both supporters and opponents of his re-election and in one case, led to the arrest of a Northport man who got into a dispute with a caravan driver who drew a gun on him after accusing the resident of threatening him with a trailer hitch.

At the meetings, drivers said opponents cursed and threatened them as they drove by; the residents complained that their narrow streets were tied up for two hours and that drivers blasted loud horns and spewed diesel fumes at them. Several Trump caravan supporters pointed out that organizers had met with the Northport Police Department and other public safety officials before hand and expressed concern about free speech. “Our constitutional rights are in play here,” one said.

On the Zoom chat where some residents were commenting, one said, “It was a peaceful event.  Patriotic.  Lovely.  These complainers are bitter.”

But another said, “I witnessed incessant, extremely loud horns; being given the finger, people screaming, cursing.  license plates were covered up with blue painter’s tape.”

Dear Residents: We have received several emails regarding the recent automobile caravan that occurred last Sunday in the Town of Huntington and included the roadways in the jurisdiction of the Village of Northport. I believe we all can agree that these are challenging times for our Country, and neither the Town of Huntington nor the Village of Northport are exempt from these challenges. Political passions are running high and local government must balance individuals and groups First Amendment Constitutional Rights with the safety and security of our residents and businesses.

The First Amendment of the Constitution gives all the right to voice their opinion and protest peacefully. We have had groups of all political views come to the Village of Northport and voice their opinions. We as local Village Officials are fair to everyone and we do not take sides politically, simply stated, we follow the law. With regard to last Sunday, we were informed that a caravan of cars was going to drive through the Town of Huntington which included the roadways in the jurisdiction of the Village of Northport.

As it has been our policy with other groups, the Police Chief and myself, in consultation with the Village Attorney, met with the organizers of the event. Representatives of the Town of Huntington Public Safety Department and representatives of the Suffolk County Police were also present. We worked out a plan taking into consideration the balance between legal rights under the Constitution and the safety and security of the Village of Northport. As usual our Northport Fire Department was fully prepared and ready to handle any medical emergency. As we have done in the past the Police Chief had our entire police force present on Sunday and coordinated our efforts with the Suffolk County Police Department to make sure that the Village of Northport was safe and secure and our businesses were protected. For the most part the car caravan went through our Village of Northport without incident. There was some honking and name calling and a few individuals from both the caravan and people opposed got loud. Nevertheless, no violence occurred. There was one incident that did occur, but due to the quick response of our Northport Village Police the incident was quickly taken care of.

Please be assured that our Village Officials and Police Department are completely engaged in potential future events that may occur in the Village of Northport. I have complete confidence in our Police Chief and the members of the Northport Village Police Department. I am personally engaged and will continue working with all to assure that people’s rights are protected and that Northport Village continues to be one of the safest and secure places to live and have a business. 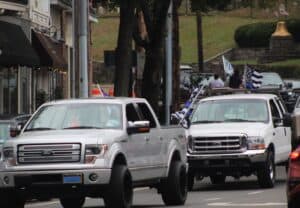 Caravan in Huntington, coming from Northport on Sept. 27