The show is part of the New York  State Field Band Conference series, which culminates in  championship competition Oct. 29-30 in Syracuse.

Whitman Moves Up in Niche Ratings

Walt Whitman High School was ranked fifth out of 59 public high schools in Suffolk County in a new rating by Niche. Islandwide, Walt Whitman stands at No. 22 of the more than 125 high schools across Long Island.

The school moved up from 8th to 5th place in the Suffolk County rankings,  Statewide, it ranks 71st  of 1,255 public high schools.

“We are extremely pleased in moving up into the top 5 of high schools in Suffolk County, and in the top 10 in overall scores for our school district.  We believe we can keep moving in this direction, and we’re happy that the community feels good about its schools. It also shows a commitment from all of our employees to give all young people in this community a great experience through the South Huntington School District,” said Superintendent Dr. Vito D’Elia.

Niche compiles profiles on every school and college in the United States, using US Department of Education and other public data, plus millions of reviews and ratings from students, parents and teachers to come up with its rankings. In addition to academics, Niche grades schools in the areas of administration, teachers, diversity, college prep, sports, clubs and activities, facilities, and food.

Half Hollow Hills Robotics Invitational is scheduled from 9-5 on Oct.29. Students and families are welcome to attend and see therobotics team compete against other teams from across Long Island. 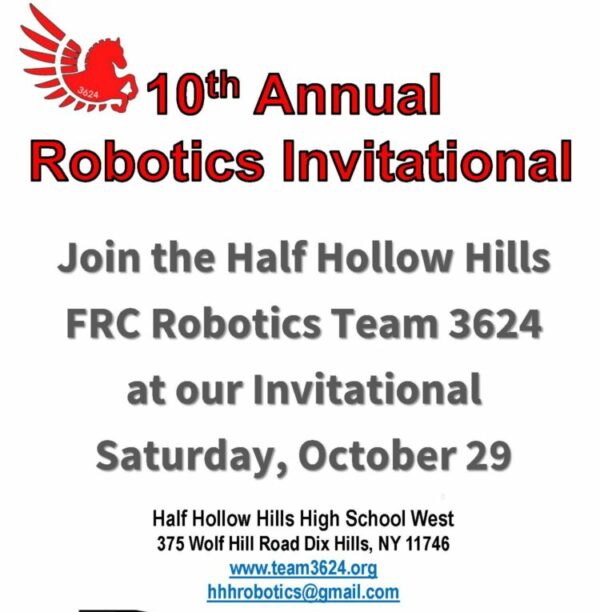 Residents of the Elwood School District are voting Tuesday on whether to amend the bond project approved by voters in 2017. The amended project, if approved by voters, would now include a turf athletic field at Elwood-John H. Glenn High School at a cost of an additional $2.45 million. The vote will be held from 6 a.m.- 9 p.m. in the Elwood Middle School cafeteria.
In addition to replacing the existing grass field with turf, the project includes the installation of new football and soccer goalposts, as well as lacrosse goals and accessories. Perimeter safety netting would also be installed, and new high jump, long jump and pole vault runways would be added.
Additional information regarding the proposal can be found on the district’s website, www.elwood.k12.ny.us.